Home Casino chip Why Casinos Use Chips Instead of Cash The way casino and poker chips look now is very different from where the chip came from. Back in the 1900’s the first thing people like Phil Hellmuths and Gus Hansens would not bring chips to the poker table, but they would bring gold nuggets, chips, and even dust. Seeing the problem these little gold particles created, the saloons and other gaming houses needed a standard format to keep things more organized.

Of course, as the saloons and game houses were making these chips of clay, ivory, and bone. Someone is always trying to copy and get a foot up on someone else. So to keep things like that from happening, they had to do something special to keep this from happening. A few of things these locations did was brand their chips, and make small things, making it almost impossible for them to be copied.

A big reason why casinos use chips instead of cash is that they separate the player from his or her actual money. Yes, it’s easy for the gambler to remind themselves that each chip is worth a given amount of money. But just the simple fact of changing the cash into small ceramic tokens makes it so much easier for the player to separate with them.

If someone was sitting at a poker table placing actual money on the table. It would be too easy for them to sit there and look at that $20 bill or a $100 bill, and think about what they are doing before it vanishes. So changing the money into chips makes it easy for someone to throw it on the table, and watch it get picked up by someone else because the gambler lost it.

Nothing makes someone want to gamble more, then when they walk past a table and they see someone with almost a moat around them made of nothing but chips. As it is always said, the house always wins. So as the game they play tips away from their favour. They will quickly keep working to get more and more of those chips.

Casinos like how much easier chips are for managing them. Even in big games and large money values. A lot of things could go wrong with just money. It can be easily blown around, or miss counted. Who hasn’t heard that money is very dirty? That one $1 bill could be the home for 3,000 different bacterias. With those kinds of numbers, it is not unheard of that antibiotic-resistant bacteria could be on that money. With that being said, casinos are very concerned about keeping not only their customers safe but also their employees. Research has been done, the numbers back these thoughts. Showing that fewer employees called in sick when using chips, instead of actual money.

Reduces the chances of cheating

When chips were first made, they were made of several things like clay, plastic, ivory, or wood. Casinos jumped on the opportunity when technology got so small that tracking devices and microchips could fit in thinner spaces. They now put microchips in their chips to keep people from copying their chips. Some people have tried to make copies of the chips and use them to cash in on them.

There was a young man that parked his running motorcycle at a casino. Also at the same casino was a big craps event. What the man had done was run into the casino, to the craps table, and just grabbed what he could have. Once the casino had heard that a lot of the chips the cyclist had grabbed were the $25,000 chips. So they put the thief in a tight situation. Not wanting to lose all the money he had stolen, he tried putting the chips on a poker form and tried to sell them. Little did he know that the person who was trying to buy them was working with the local police and turned the thief in.

As some people who don’t gamble see some of the measures that casinos have to go through to keep their money safe. They probably wonder why the casinos don’t convert over to a hand-held device. The simple reason is, that their customers like the feeling of having huge piles of chips tucked between their arms while they shuffle them. So as long as their customers want chips, the casinos will provide. 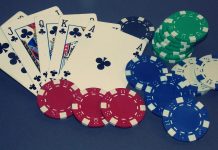 Casino Chips Have Gone Through Some Big Changes Over the Years